As part of Girlguiding Cambridgeshire Wests  “Big Munch Challenge”, the Brownies have been exploring many facets of food and what better way to get involved than with a local company priding itself on using local potatoes to create a ‘Natural British Crunch’.

The Brownies were given a guided tour of the Farm by Rod Garnham, co-founder of  Corkers Crisps: everything from the potatoes coming in to the finished crisps going out.

The Brownies were taken into the sorting shed where the potatoes are graded before being packed. They learned that Corkers grow Naturalo potatoes and were surprised to find out that they cannot be bought locally because they are not pretty enough!

Some of the potatoes are sent to Scotland and Ireland to be made into chips; it is the peaty fen soil that provides the optimum growing conditions for the potatoes that makes the travel worth while.  As Naturalo potatoes have a high starch content they do not brown in the same way as potatoes with a high sugar content but apparently this makes much better chips and crisps.

The Brownies were told how the potatoes that are destined to be turned into crisps are washed, sliced and fried on the production line.  They then had the opportunity to see how the flavours are added before the crisps are weighed and packed.  At the end of the tour, it was up to the board room to try out all the flavours produced by Corkers. After this, the Brownies designed their own new flavours: ranging from Roast Chicken to Chocolate and Strawberry flavoured crisps.

Witchford Brownies would like to thank the staff at Corkers Crisps for making them feel so welcome.  The icing on the (potato) cake was that everyone was given a packet of crisps to take home, although not many packets made it that far!

The Brownies were given a guided tour of the Farm 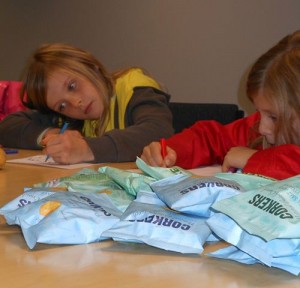 The Brownies designed their own new flavours: ranging from Roast Chicken to Chocolate and Strawberry flavoured crisps

Back to the top